American Bioweapon or the ‘China Virus’? The War of Words over COVID-19 | Melbourne Asia Review

American Bioweapon or the ‘China Virus’? The War of Words over COVID-19

Over recent weeks, the United States and China have been using increasingly strong rhetoric around COVID-19.

The war of words had real-life consequences in late March when a meeting of the G7 failed to agree a joint statement following US State Department’s insistence on referring to the virus as the “Wuhan Virus”.

How have the two countries been constructing the other as the enemy? And what effect has this had on diplomacy in the region?

US Rhetoric: A Crisis Made in China

From the US side, there is a concerted attempt to make sure that any lasting blame should fall squarely on Beijing. This focuses both on the origin of the virus and the People’s Republic of China’s response.

On 17 March US President Donald Trump tweeted about COVID-19 as the “Chinese Virus”. On 18 March, a CBS News journalist quoted a White House official referring to the virus as “Kung Flu”. On 19 March the President’s briefing notes were amended to replace the word “corona” with “Chinese”.

In the early stages of the outbreak in January, Chinese state media referred to the “Wuhan Virus” but since then, the use of geographic terms has become highly politicised.

World Health Organisation (WHO) officials have warned against the use of such terms due to the potential for racial profiling and named the virus COVID-19 to avoid stigmatising one geographical location or group of people. In response to criticisms of his use of “Chinese Virus”, Trump tweeted on the importance of protecting the Asian-American community.

The other area of US criticism is the Chinese government’s response to COVID-19, particularly Beijing’s delayed response and lack of transparency. The rhetoric paints China as secretive and untrustworthy: often focusing on China’s history of withholding information, such as in its response to Severe Acute Respiratory Syndrome (SARS) in 2003, and the suppression of early warnings of the outbreak in Wuhan including by  Dr Li Wenliang.

Secretary of State Mike Pompeo has been increasingly critical of China’s lack of transparency around early details of the outbreak and “the disinformation campaign that the Chinese Communist Party is engaged in to try and deflect from what has really taken place here.” President Trump re-tweeted a claim by high-profile commentator Andrew McCarthy that China is lying about their COVID-19 numbers. US intelligence has now reportedly released a report to the White House that China is underreporting both total cases and deaths in the country.

Overall, it seems the US strategy is to paint COVID-19 as a “local problem in Wuhan turned into a global pandemic” – as described by a Republican Senator – shifting the blame squarely and solely to Beijing.

China has used two strategies in its recent communications: muddying the waters around where the virus originated and showing what it regards as its success in handling the outbreak.

There have been claims from China that COVID-19 could have originated in the United States. On 12 March foreign ministry spokesman Zhao Lijian tweeted “It might be US army who brought the epidemic to Wuhan” linking this with the Military World Games in October. His claim was backed by fellow foreign ministry spokesman, Geng Shuang, who said there were “varied opinions” on the origin of the virus. This was disavowed by China’s Ambassador to the United States, Cui Tiankai.

By even temporarily injecting doubt on the origins of the coronavirus through this discussion, Beijing hopes to escape blame. It shows a shift in the willingness of China’s foreign policy establishment to push back against the United States, with President Xi Jinping reportedly ordering diplomats to show “more fighting spirit”.

As the epidemic slows in China, officials are presenting it as a victory for the nation. This narrative of war and battle can be seen in President Xi Jinping’s declaration that ‘Wuhan must win, Hubei must win, and the whole of China must win’ and his statement to the UN Secretary-General, Antonio Guterres, that China will win its battle against COVID-19.

In both cases, one of the primary audiences for this rhetoric is the domestic public

As the virus runs rampant in the United States, Washington is fearful of domestic repercussions. For the US, 2020 is an election year and a time when Trump does not want to be seen as responsible for COVID-19. A reason for Trump’s initial insistence on terming it the “Chinese virus” may be his confidence in the effect of travel restrictions on China, one of the few early actions his administration took against the virus, which he believes saved tens of thousands of lives.

For China, domestic survival is its priority: preserving the legitimacy and upholding the authority of the Chinese Communist Party. In this context, WHO Director-General, Tedros Adhanom Ghebreyesus’ praise for the Chinese government’s response to COVID-19 as “setting a new standard for outbreak response” is precious. If the US is seen to handle the crisis badly, this can be presented as showing the superiority of China’s political and governance system. Hervé Lemahieu, the Director of the Lowy Institute’s Asian Power and Diplomacy Program, describes the “symmetry between the United States and China using the coronavirus as a political football”.

In terms of international public opinion, who will be blamed is an important question

China has grasped the opportunity to position itself not as the source of the virus, but a country that helps others: a responsible and humanitarian global power. China’s ambassador to the UN, Zhang Jun, has said “We’ll do whatever we can to help other countries in fighting the COIVD-19”. By offering aid to partners through its “mask diplomacy”, China hopes to position itself as a leader in what the EU’s High Representative Josep Borrell has described as the “politics of generosity”. The most striking example is Chinese billionaire Jack Ma donating one million masks and hundreds of thousands of testing kits to the US.

It is not clear yet how effective China’s “mask diplomacy” will be. There have been cases in the Netherlands, Spain and Turkey of faulty supplies from China. But COVID-19 is a clear opportunity for China to use its economic clout and dominance in global medical supplies.

China has also not missed the opportunity to promote the superiority of its own system: On March 28, the Chinese Ambassador to France tweeted that Asian countries, including China, have been particularly successful in the fight against COVID-19 due to a sense of community and good citizenship lacking in Western democracies. He is just one of a growing number of Chinese ambassadors leveraging Twitter – a Western social media platform – to expand Beijing’s influence and shape the global information environment. COVID-19 gives an opportunity for China to tout its authoritarian system as more successful than the West.

By contrast, the United States has yet to show leadership – domestically or internationally – in the same way it did, for example, during the Ebola outbreak in East Africa. While the US dealt with Ebola, SARS and Zika with its unparalleled medical research capacity, the current pandemic is proving to be a ‘traumatic, overwhelming public health emergency’. How prepared Washington is to lead a global response will depend largely on the President: and under Trump, the instinct is to go it alone.

There is speculation that Washington’s failure to control the virus will result in China seizing a leadership position. Beijing understands that if it is seen as stepping up to the plate where Washington is unwilling or unable to do so, it has the chance to fundamentally shift global politics.

The relationship between the United States and China was already bad before the COVID-19 crisis. Distrust and animosity have only grown in the past few weeks amidst the war on words over who is responsible for the global pandemic. For example, US and Chinese journalists have found themselves caught in tit-for-tat expulsions following the Wall Street Journal’s opinion piece titled “China Is The Real Sick Man of Asia”.

As the epidemic worsens, particularly in the United States, so will the scapegoating and the narrative war. There is the potential for US–China tension on COVID-19 to further fuel existing economic and security tensions across the region, such as their trade war. Increased tensions will make it harder for China and the United States to communicate and cooperate effectively as is essential on this transnational threat. Of great concern is the potential politicisation of the World Health Organization.

Authors: Melissa Conley Tyler is Director of Diplomacy at Asialink at The University of Melbourne. She tweets at @MConleytyler.

Tiffany Liu is a Master of International Relations student currently interning with Asialink. 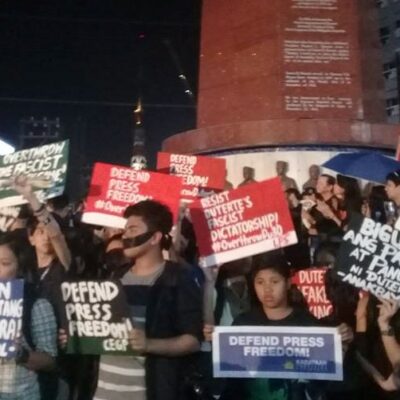