In the months following the global outbreak of COVID-19, the Taiwan government’s handling of the crisis has been widely reported in the international media as exemplary.

Foreign media have commended the Taiwan government for what is regarded as its success in halting the spread of the virus. Taiwan’s official figures show less than 500 confirmed cases and less than 10 deaths as of mid-August, a very low number given its population of almost 24-million and close geographical proximity to the Chinese mainland (although testing rates are low).

However, within Taiwan, media commentary on the Taiwan government’s handling of the crisis has been far more varied.

Some media has reported on the topic in a way that has served to elevate the competency of the recently re-elected Tsai Ing-wen government and emphasise the benefits of its handling of the crisis for Taiwan’s relations with the US and Europe—most notably, Formosa TV, Sanlih E-Television (SET TV) News, Liberty Times and Next TV.

In contrast, other media outlets have largely deflected attention from the government’s successes by focusing more on how its management of the crisis has harmed relations with China. This section of the media includes TVBS News, China Times, Chung T’ien Television (CTi) News, China Television (CTV) News and Taiwan Television (TTV) News.

These differences are bound up with political tensions within Taiwan over its political future and its relationship with China.

The two sides of the Taiwan Strait have been in a complex state of confrontation since the end of the Chinese Civil War in 1949. This war pitted the Kuomintang against the Chinese Communist Party and resulted in the relocation of the Republic of China government under the Kuomintang to Taiwan. In contemporary Taiwan, there are marked differences over whether it should seek independence, or reintegration with China in line with the notion of a united China. Media reporting in Taiwan on COVID-19 has reflected these differences.

“Taiwan can help, and Taiwan is helping”

The former section of the media—that is, the media most favourably disposed towards the government’s handling of the pandemic—has portrayed the government as heroic in the face of a global disaster, emphasised its contribution to the management of the disaster, and promoted the idea that Taiwan is the “world’s safest country”.

The Taiwan government has claimed to have the best pandemic response worldwide and emphasised the way this has benefited Taiwan’s foreign relations, particularly with the US and European Union countries. Supporting this stance, large sections of Taiwan’s media have widely publicised the slogan “Taiwan can help, and Taiwan is helping”, devised by a set of campaigners seeking to promote a positive image of Taiwan on the international stage, and adopted by the government itself. It seems likely that the government has encouraged use of this slogan within foreign affairs circles and the media.

This section of the media has also praised the Taiwan government for its so-called “mask diplomacy”, a diplomatic gesture launched by the Tsai government in early April in which it sent large numbers of surgical masks to the United States, European nations, and other countries badly hit by the virus. An example is Formosa TV’s reporting on positive comments regarding future cooperation with the United States made by Taiwan’s Ministry of Foreign Affairs Spokesperson Joanne Ou, after the US Secretary of State Mike Pompeo thanked Taiwan for the masks and recognised Taiwan as a “real friend”. Formosa TV gave her comments substantial airtime in contrast to many other sections of the TV media.

In the same week, Liberty Times, a daily Taiwanese broadsheet newspaper, recognised the potential for Taiwan to become an internationally recognised mask producer that could have flow-on effects for diplomacy—a unique “Taiwan model” which would extend beyond just sending out masks to include collaborating with European countries on the development of vaccines and acting as a responsible global citizen.

In drawing attention to the government’s achievements in handling the pandemic and building close foreign relations with the US and Europe, this section of the media has often portrayed China in a negative light. Liberty Times’ reporting on Taiwan’s “mask diplomacy”, for instance, implied that its model is very different to that adopted by the Chinese government, the latter being mainly concerned with promoting China as a major world power.

Similarly, some media outlets have criticised the Chinese Communist Party’s Taiwan Affairs Office for significantly delaying the evacuation of Taiwan nationals from Wuhan in early February, despite the Taiwan government’s efforts to secure their early repatriation.

As lock-down measures were imposed on Hubei province in late January, numerous foreign countries organised evacuation flights for their citizens living or travelling in Wuhan. Taiwan wished to do the same, but was unable to execute the operation smoothly, causing many of its nationals to become political “refugees”. The Liberty Times lamented the emotional “tragedy” of the delay while Next TV offered a pessimistic account of the disruptions faced by the government. But, in framing the Taiwan government as valiant in the face of Chinese government inaction, this media reporting has portrayed the former in a positive light and reinforced a negative image of the Chinese Communist Party.

The second section of the Taiwan media has offered a more critical perspective on the Taiwan government’s management of COVID-19, especially its implications for Taiwan’s foreign relations with China. This section of the media has, on numerous occasions, sought to undermine the notion that the government’s “mask diplomacy” has been a success. It has also been loudly critical of the Taiwan government’s management of nationals’ evacuation from Wuhan, rather than critical of the Chinese Communist Party.

Taiwanese newspaper China Times published a survey on 1 April in which 81.26% of respondents expressed disapproval with mask donations to foreign nations on the grounds that local Taiwanese might not have enough masks to use for themselves. Cable news channels including TVBS News and Taiwan Television (TTV) News subsequently mocked the government’s claims with regards to the success of foreign diplomacy through mask donations by reporting on Vietnam’s mask donations to other countries. Taiwan had donated masks to Vietnam, but it seems that the latter then transferred these masks to other countries like France and other European Union countries. TTV commented that masks should be sent to overseas Taiwan nationals instead of countries that would give them away. In June, China Television (CTV) News reported on the opening of many European countries on 1 July, allowing their nationals to travel to ‘safe’ countries, which did not include Taiwan. CTV criticised the Taiwan government for what it regarded as its failure to ensure foreign countries would recognise Taiwan as a ‘safe’ place. It stated: “if this is to go on, the government might have to change their slogan from “Taiwan can help”, to “Taiwan needs help””.

This section of the media has also been very critical of the Taiwan government’s actions in relation to evacuation of Taiwanese residents of Wuhan. TTV News reported that Taiwanese residents of Wuhan expressed “deep disappointment” with the Tsai government for making them wait a very long time for their flight home. Chung T’ien Television (CTi) News reported complaints by direct family members of Taiwanese nationals who hold Chinese citizenship that they had been treated as outcasts and suffered prejudice because of the Taiwan government’s decision to ban them from returning to Taiwan with their spouses and children.

What’s in a Name?

So different have been the narratives constructed by these two sections of the media that they have even referred to the virus using different names.

Prior to the World Health Organisation officially naming the virus COVID-19, Taiwan media had collectively called it “Wuhan pneumonia” (Wu han fei yan). After it did so, the Taiwan government, the Central Epidemic Command Center and media outlets aligned with them have continued to use the term “Wuhan pneumonia”, arguing that it will be easier for the public to understand.

The other section of the media, however, began using the official name, COVID-19, and shot back at those who continued to use inflammatory language. For example, the newspaper United Daily News criticised President Tsai for being “allies in discrimination” with US President Trump by ignoring the implied racial discrimination and calling COVID-19, the “Wuhan pneumonia”. Similarly, cable channel TVBS News reported a comment by former Taiwan health minister, Yeh Ching-chuan that the Tsai administration had shown “prejudice” toward mainland Chinese authorities.

Political division within the media sector

Underpinning these different stances within the media are fundamental differences between the state’s two major political parties—the Kuomintang and the Democratic Progressive Party (DPP)—and their media allies over Taiwan’s future, especially with regard to the question of Taiwan’s foreign relations and China.

Since transitioning from authoritarian rule to democratic rule in the 1980s, Taiwan’s political system has been dominated by two major coalitions. The pan-Blue coalition, which backs the Kuomintang, has typically supported a Chinese identity over a Taiwan identity and favoured stronger diplomatic relations with mainland China.

By contrast, the pan-Green coalition, which backs the DPP—led by current President Tsai Ing-wen—has supported Taiwan’s independence over Chinese reunification and adopted a far more aggressive approach to relations with mainland China.

The media outlets that have elevated the competency of the Tsai government, actively promoted the “Taiwan can help” slogan in COVI-19 discourse and maintained use of the term “Wuhan pneumonia” have tended to support the DPP. As mentioned above, these outlets include, but are not limited to, Formosa TV, Liberty Times, SET TV and Next TV.

In contrast, the outlets that have sought to draw attention away from Tsai’s successes by considering the impact on Taiwan’s relations with China, have typically supported the KMT and harboured pro-unification sentiments. As mentioned, these outlets include, but are also not limited to, TVBS, TTV, CTV and CTi.

The media sector of present-day Taiwan operates under a private ownership structure. It has been recognised by Reporters Without Borders and Freedom House as one of the highest-ranking countries in East Asia with a free press.

The status of a fully independent media system is, however, questionable given the media’s gravitation toward distinctly political lines. Taiwan media companies have tended to shape their narratives according to the political stance taken by the main business owner.

For example, CTi News is a subsidiary of the China Times group, which is under the ownership of long-time supporter of the KMT, Tsai Eng-meng. Because of this, CTi News has had a strong leaning toward the pan-Blue coalition, and friendlier relations with mainland China. On the other end of the spectrum, Lin Kun-hai, the Chairman of Sanlih E-Television (SET) who has been long term friends with Frank Hsieh, Taiwan’s former Premier from the DPP (2005-2006), steered his company toward independence sentiments and the pan-Green coalition, creating a public platform that bred anti-China sentiments.

Main media outlets in Taiwan and their political affiliations 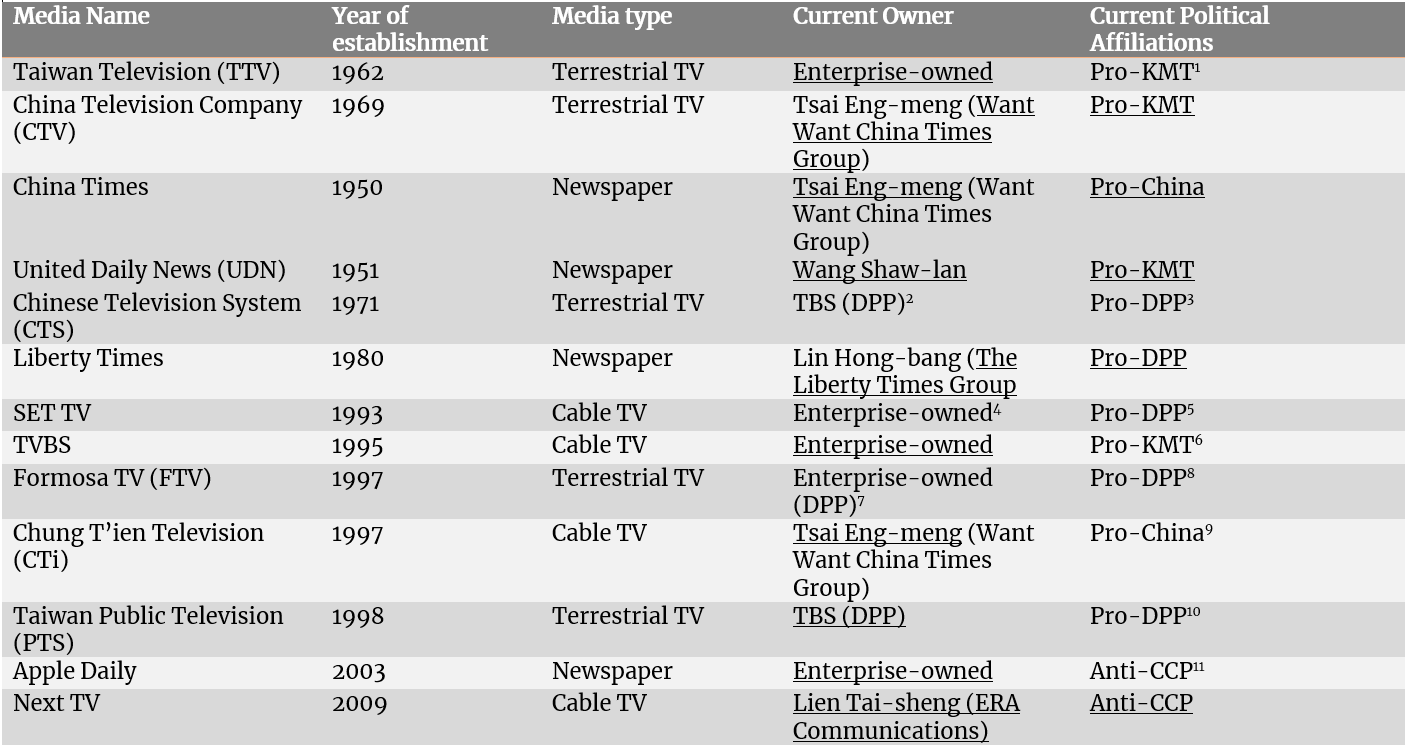 In Taiwan politics, the main dividing line is drawn along relations with China. In its reporting of the COVID-19 pandemic, Taiwan media has shown its political bias and, in this sense, it has been about more than simply the immediate challenges posed by the pandemic but has constituted something of a proxy war over fundamental issues to do with the future of Taiwan. 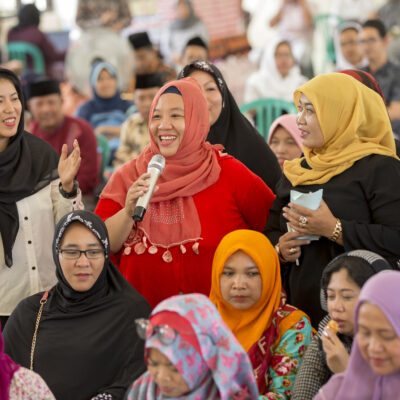 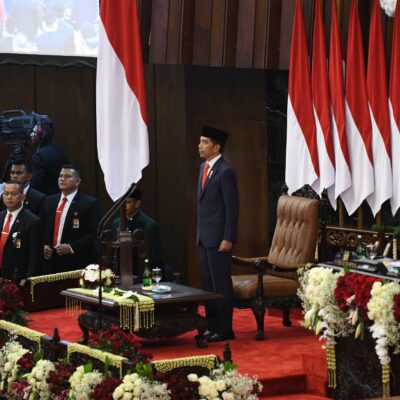 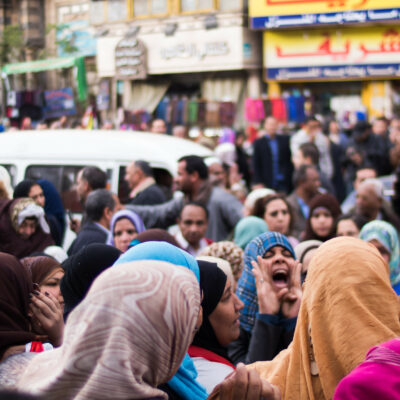 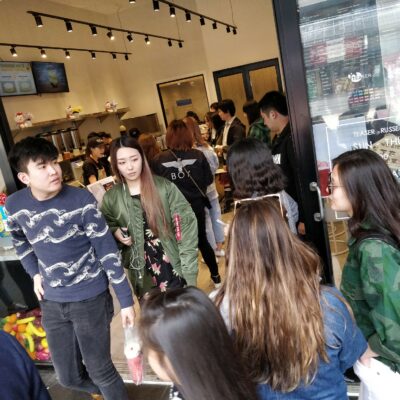