‘Happy Together: Bridging the Australia-China Divide’ by David Walker and Li Yao, with Karen Walker 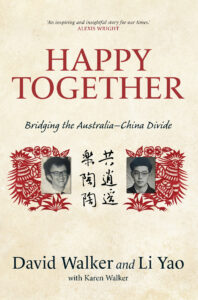 Li Yao is a major figure in Australian Studies in China, not least as the leading translator of Australian writing into Chinese. After graduating from the Inner Mongolia Normal University on the eve of the Great Proletarian Cultural Revolution he served as a writer, editor and translator there and elsewhere in Inner Mongolia. He started translating Australian literature in the 1980s and visited Australia for the first time in 1988. In 1992 he moved to Beijing to be Professor of English at the Training Centre of the Ministry of Commerce; and became Visiting Professor of Translation at Beijing Foreign Studies University.

This is a kind of dual biography, about themselves and about the societies from which they emerged before they met in 2012. This happened when it was suggested to David Walker (by another celebrated Australian author and Sinophile, Nick Jose) he should meet Li Yao with the possibility of the latter translating David Walker’s autobiography – Not Dark Yet – into Chinese. As is clear from the book’s title the two became fast friends. Indeed, the framework of the book loosely follows their journey around China visiting places associated with Li Yao and his family, and their backgrounds. Walker’s family and career background are then interspersed at appropriate places, along with stories and anecdotes about people and places in both China and Australia.

Both were born in 1945 and explicitly in the book delight in the fact that they are ‘Roosters’ in the Chinese Lunar Zodiac Cycle. Each is also the child of school teachers, Walker in South Australia, Li in Inner Mongolia. There are though significant differences in their life experiences, as one might expect.

For Li Yao, living through the early years of the new revolutionary years of the People’s Republic of China (PRC) let alone the Great Proletarian Cultural Revolution was never going to be easy for a family designated as one of the counter-revolutionary classes (in this case the landlord class) by the Communist Party of China (CCP). Li Yao’s passion for literature and his childish wish to be ‘a literary giant’ was never going to be easily realised in a society that came to regard intellectuals as the ‘stinking ninth category’ of counter revolutionaries during the Cultural Revolution. His story is one of frustration and discrimination until national policy settings changed into the 1980s. Nonetheless, it is fascinating to read how his writing skills developed and even sometimes flourished under both personal prejudice and political campaigns.  Sent to a state-enforced political re-education camp

during the Cultural Revolution he smuggled with him (rather foolishly it would seem given the political strictness of the regime described) three favourite English-language books: Pride and Prejudice; Alice in Wonderland; and Path of Thunder. He even attempted to write his own novel, but then when it was completed realised how dangerous that might turn out, so having spent six months writing it he burnt it over a month, two pages at a time so that no-one should ask what he was doing and expose him. Unsurprisingly for a landlord descendent a sense of fear about the actions of ‘the authorities’ permeates the account of his life and work before 1980.

In 1980 Li Yao was introduced to Australian literature by Alison Hewitt, an Australian teacher of English from Perth who visited Inner Mongolia Normal University for a few months as part of an Australian Government scheme. She first passed on a collection of Lawson’s short stories, knowing Li Yao’s interest in translation, and then Patrick White’s The Tree of Man. It was Patrick White rather than ‘The Drover’s Wife’ that seems to have proved the turning point in Li Yao’s fortunes. Translating a Nobel Prize winner conveyed a certain cachet in China’s rapidly developing Humanities. But in addition, Li Yao thought to enlist the assistance of Professor Hu Wenzhong at Beijing Foreign Studies University. The latter was an early post-Cultural Revolution University of Sydney graduate who headed the Australian Studies Centre at Beijing Foreign Studies University.  It was a path that led not only visits to Australia, but also recognition as a translator in the China Writers Association, and a transfer to Beijing.

It is hard to imagine a more different background and personal development to that of Li Yao than those experienced by David Walker. Born and brought up in much more stable, not to say conservative South Australia, it is hard for the reader not to smile on occasion. According to Walker, his mother criticised former Premier of South Australia Don Dunstan because he spoke ‘far too fluently and went to the theatre.’ Walker also remarks that ‘On Dit was another eye-opener’ on attending the University of Adelaide.  On Dit was and remains the student newspaper there, but certainly far less confronting than the political campaigns encountered by Li Yao at the same time in the 1960s. Walker is frank about South Australia’s Anglo-colonialism and conservatism at that time, and even about his own naivety, remarking that he was ‘As a teenager happy to echo the (Adelaide) Advertiser in warning that the Chinese were about to invade defenceless Australia.’ Though Walker does add ‘His beliefs on these big geopolitical questions have not yet been challenged by any reading of Chinese history.’

Walker’s interest in the colonialism of Australian society towards Asia led him into Australian Studies and eventually not just the domestic colonialism but its international dimensions and the lack of or oddly configured relationship between Australia and Asia. While his paths of thought are not clearly laid out in this book, his interactions with David Reeves and John Ingleson at the University of New South Wales during the 1980s seem to have been extremely influential. In his case recognition by both the Australian Academy of Social Science and the Australian Academy of Humanities later demonstrated his wider impact as a historian of Australia and Asia.

For anyone interested in these two creative writers, this book is essential reading; and to some extent it provides insights generally into the backgrounds of professional intellectuals of those kinds. It is though appropriate that Li Yao’s story is clearly the main point of the exercise for translation is the core of this book. Translation is probably the most under-rated of intellectual and academic pursuits. Most universities do not count translations as publications along with ‘research output’. There are no Australian Research Council Translation Grants. Yet translation is both crucial to understanding other societies and not easy. This is not just a matter of rendering one word in one language to its equivalent in another (pace machine translation.) Try expressing ‘understatement’ to a contemporary German in German; or the equivalent of ‘inequality’ as a noun in Chinese. Native speakers will look at you in puzzlement. Translation also needs an understanding of the context and social background of language and human interaction. This is what this book presents rather than the superficiality of the immediate and the surface.

Main image L-R: Li Yao and David Walker, 2013. Thanks to Melbourne University Publishing for permission to use this image, and that of the book cover.

Fortress North Korea and the battle against COVID-19

Minority languages in China and the national preservation project